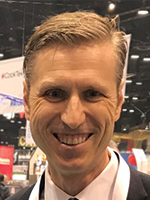 Mr. FitzGerald served as Vice President and Chief Financial Officer of The Middleby Corporation since 2003. Prior to that, he was Vice President and Corporate Controller of Middleby from 1998 to 2003. Mr. FitzGerald has been heavily involved in all strategic and operating decisions during his tenure, and has been responsible for the Middleby acquisition and business development activities since joining the company. Additionally, Mr. FitzGerald has lead the development and had oversight for the Middleby Worldwide international sales and distribution operations. More recently he developed the Middleby residential distribution platform supporting growth for Viking and all the residential brands. Prior to Middleby, Mr. FitzGerald held positions at Arthur Andersen in audit and consulting from 1991 through 1998, assisting clients in restructurings, business integrations, and mergers and acquisition activities.