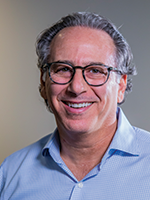 Roger David started his career at Gold Star as a dishwasher and now leads the organization that boasts two iconic brands in its portfolio as President and CEO of GSR Brands, the parent company and franchisor of two successful brands: Gold Star and Tom & Chee. David oversees a team of dedicated professionals working to continue building the Gold Star brand that the first generation of his family began more than 50 years ago. Since being named president and CEO in 2015, David has expanded the business to include Tom & Chee, the famous grilled cheese melts and soup restaurant chain that rocketed to stardom thanks to a successful appearance on ABC’s Shark Tank, as well as the creation of GSR Brands.

Under his leadership, Gold Star completed strategic updates to all areas of its business in order to drive success and growth for the next 50 years and beyond. A $25 million investment translated into a new restaurant look, menu and guest experience for its 70+ locations throughout Ohio, Indiana and Kentucky. David believes restaurant brands are built table side and has advanced the company’s training and development efforts, as well as a deliberate investment into facility efficiencies in order to build environmentally-friendly restaurants, which pays off for franchise owners who are realizing improvements in labor costs, energy usage and employee productivity. Those same learnings are being applied to Tom & Chee, which launched a new store prototype that includes redesigned spaces, updates to the brand, and a simplified menu that will allow franchisees to run more profitable restaurants.