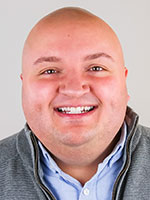 At Datassential, Kostyo oversees the company's seven TrendSpotting magazines, custom client publications, and he leads trend immersion tours and ideation sessions across the country. Kostyo was a recurring guest on Fusion TV's "The AV Club Show"; has been featured on WGN Radio, CBS Radio, and Gimlet Media's "Why We Eat What We Eat" podcast; is regularly featured in newspapers and magazines; speaks at numerous conferences across the country annually; and he was a judge on Food Network's "Eating America." He has a master’s in gastronomy from Boston University, plus certificates in the culinary arts, baking arts, wine, and artisan cheese production. In his spare time he teaches cooking classes and co-founded a monthly food swap in Chicago.